Nearly half of the mammalian genome is derived from mobile genetic elements, including members of the long terminal repeat (LTR)-containing endogenous retroviruses (ERVs), and the non-LTR-containing retrotransposons (LINE-1 and SINE-1). These genetic elements are considered a driving force in vertebrate evolution and there are many examples of retroviral genes, non-coding RNAs or promoters that are used by the genome of their hosts. Hence, the expression of these elements must be tightly regulated during embryonic development to balance the potentially damaging effects of widespread retrotransposition against the benefits of promoting genetic diversity. The nature of this regulation is not fully understood.

ES cells have the remarkable ability to potently suppress the expression of endogenous and exogenous retroviral sequences. This transcriptional silencing is critical to the maintenance of their genetic stability, since it allows successful differentiation into mature cell types without lethal genotypic damage from retroviral gene integration.

In my research, I study the various mechanisms of epigenetic silencing in ES cells and during their development. Using retroviral vectors, I have characterized two distinct retroviral silencing mechanisms and their kinetics of action. I showed that following retroviral infection, the establishment of silencing is dependent on the protein Yin Yang 1 (YY1), and that the loss of this protein leads to epigenetic changes of the proviral DNAs, including long-lasting loss of DNA methylation. Together, my results suggest that the study of retroviral silencing provides a useful tool for dissecting the molecular details of the ability of ES cells to mark genes for silencing - a crucial aspect of ES cell identity. 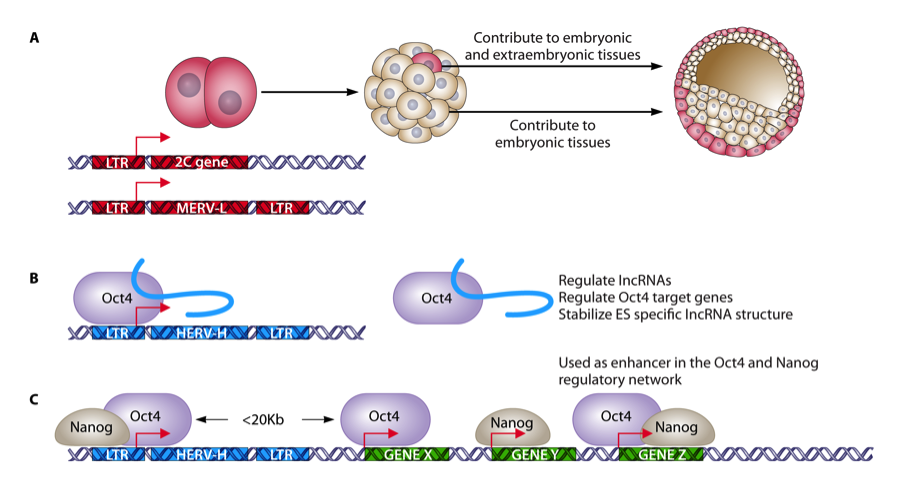 MERV-L elements and their remnant ‘solo’ long terminal repeats (LTRs) have coopted to participate in gene-regulatory networks, by serving as primary alternative promoters of nearby genes. A subset of mouse embryonic stem expresses MERV-L LTR-driven chimeric transcripts, which correlates with increased potency. (b) HERV-H interacts with Oct4 to promote enhancer activity of LTR7 nearby regions and to drive the expression of neighboring lncRNAs and protein-genes essential to hESC identity. (c) ERV1 elements in human and mouse genome carry transcription factor-binding sites for OCT4 and Nanog, which can regulate form the pluripotency network near insertion sites, leading to novel regulatory patterns in evolving mammals.